Priorat is a small area in Catalonia, a county where two different Designations of Origin coexist: Priorat and Montsant, really very close but different.
A key aspect is the soil: the basis of the Priorat soil is the slate (called llicorella in Catalan) with traces of mica and the steep slopes. The main consequence is that the roots of the vines need to reach the ground-water table because the slate doesn’t retain the water.
In this region, the vineyards are at different altitudes, from the 200 m the lowest point up to 750 m above the sea level in places like Porrera, which can make a big difference between the vines and grapes.
Also, the climate is important: summer is a long season, hot and dry with great contrasts of temperature, which can change from the 35-40ºC during the day to the 15ºC or less at night.  The winter is really cold in this area.
So, the soil, the height and the climate determine a charming landscape which captivates you.
The result of all these distinguishing marks are young wines, deeply coloured, brilliant with persistent and serene aromas and on the palate are chewy and full-bodied, with a long aftertaste. Often these wines have a high alcohol content (between 14% and 15% abv), but with a well integrated tannins and very well balanced.
The criança and reserve wines are aged in oak barrels smoothing away any aggressive notes due to their youth. In this way, they obtain a complexity that only can be perceived through taste and smell.
In the Priorat Designation of Origin you can find different kinds of wines depending on where are they from: Single State Vineyard and vi de vila that we can translate as “wine of the village” because the difference between villages (specially their geography and soil) make a big difference to the wines). Both are precisions of some Priorat wines (in this video http://vimeo.com/23003431 Álvaro Palacios, Daphne Glorian and also René Barbier explain it very well... but in Spanish).
Read more »
Posted by Gemma at 19:02 No comments:

Tasta Porrera I: More than a Priorat, a privilege (slogan Marco Abella cellar)


The wine fairs are a meeting again with friends and winemakers, and also a good pretext to visit lovely places from the Catalan geography.


The shorter days make us realise that winter is arriving and is a signal that the wine fair season is upon us.


One of the last wine fairs is Tasta Porrera (Taste Porrera),from which are wines made in this little village from Priorat: with around 500 habitants and 16 cellars. Porrera is the lowest village in the Priorat and also it’s the village with the highest vineyards because it’s surrounded by mountain ranges at  600 m above the sea level, and 700 m and more of 800 m.


When you go to Porrera and leave the main route, you realise that all that you can see in the landscape are vineyards, hazelnut and almond trees which grow in steep slopes. You realise that Porrera is basically an agricultural village. And you can imagine the harvest as a risky activity! In spite of it, the beauty of the area charms everyone, and when after a narrow route full of curves you arrive at Porrera and walk in the narrow streets you feel that you would like to live there!


In the main square of the village on the Saturday of the second weekend of November there is the Tasta Porrera (Taste Porrera), and enogastronomic fair because also you can taste specialties of the local cuisine. And this year it was the 10th anniversary of the death of a great Catalan poet, Miquel Martí i Pol, so as this was a special occasion the wines of each cellar were combined with a poem of his.


This fair has again confirmed to me that wines from Priorat (and in this particular case the wines from Porrera) have a special characteristic that make it different of the wines from other Appelation of Origin, because of their particular soil:  the slate (llicorella in Catalan).


Priorat is a well-known area for red wines, most of their production is red wine (90%), but the white wines are a little treasure. If you have the opportunity, you should taste a white wine from Priorat, they are incredibly delicious.


In Tasta Porrera we had the opportunity to taste two white wines: Lo coster blanc 2012, with a very limited production (less than 500 bottles!) and Mas d’en Compte blanc  2009,  one of my favourites and fleshier than the first one. It was a great pleasure taste these wines!

TƎRN, Garnatxa blanca: an amazing White Grenache from Terra Alta, in the South of Catalonia


Quite often, Catalan people have the tendency of thinking that Catalonia finishes at the Ebre river (or Ebro, in Spanish), but that’s not true because when you cross the river you can find an incredible region, the Terra Alta!
This area has the typical characteristics of Mediterranean areas:  with lime coastal mountain ranges, little streams, mountains with conglomerate rocks, Mediterranean forests with pine tree and holm oaks, crops of olive and almond trees and, as well, vineyards, of course.
The climate in this area is quite different from other regions of Catalonia because the summer is typical of the Mediterranean zones: sunny, with hot days, fresh nights and not much rain... the winter has a continental climate.
With all these characteristics it’s obvious that the wines from Terra Alta are different from other wines of Catalonia.  And unfortunately it’s been the great forgotten area, like Priorat years ago, when people think of quality wines. Nowadays people’s perception is changing because they are discovering the great wines, as result of the support for traditional grape varieties, specially the White Grenache, that’s become the bearer from Terra Alta. 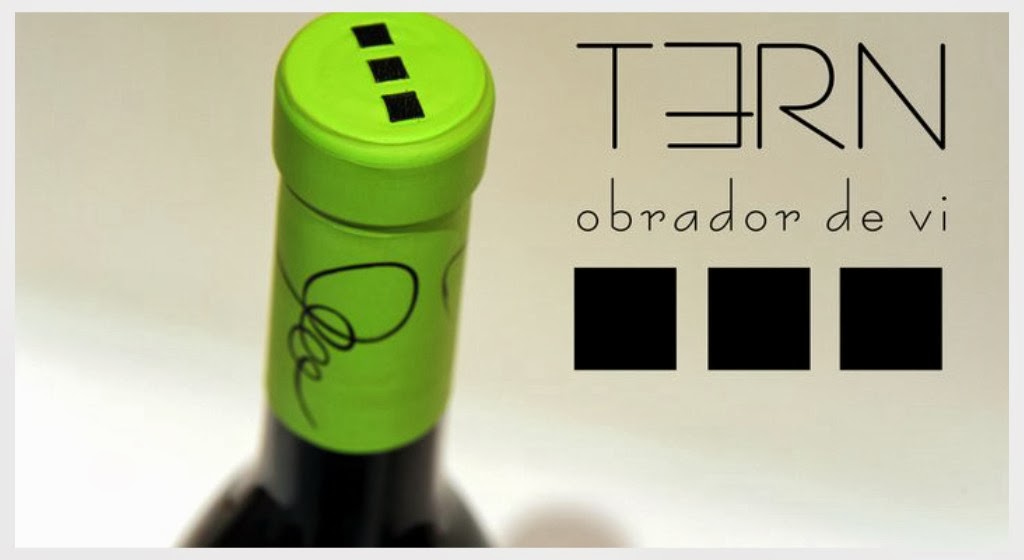 In 2010 three friends decided to join forces and start a project together. They had always wanted to make quality wines, but never before thought of doing it together. That’s why these three guys created TƎRN, Obrador de Vi, (TƎRN, wine workshop) and their objective was to produce quality wines.


Last June I had the opportunity of visiting, with some friends (a sommelier and a wine blogger as mad for wine as I am) a viticulture of natural wines. Yes, natural wines, wines those go far away from the organic and biodynamic wines. Natural wines show the pure essence of the grape in its finest: the wines are natural, natural from the vineyard to the glass in all the processes in between, at all the stages.
The starting point for a good wine (natural or not) are the vineyards. When we visit the Ton Rimbau’s vineyards the first surprise was the difference between surroundings vines and vineyards, the difference between the crop that nowadays we call “conventional” and the called “alternative growing” (conventional in the past). 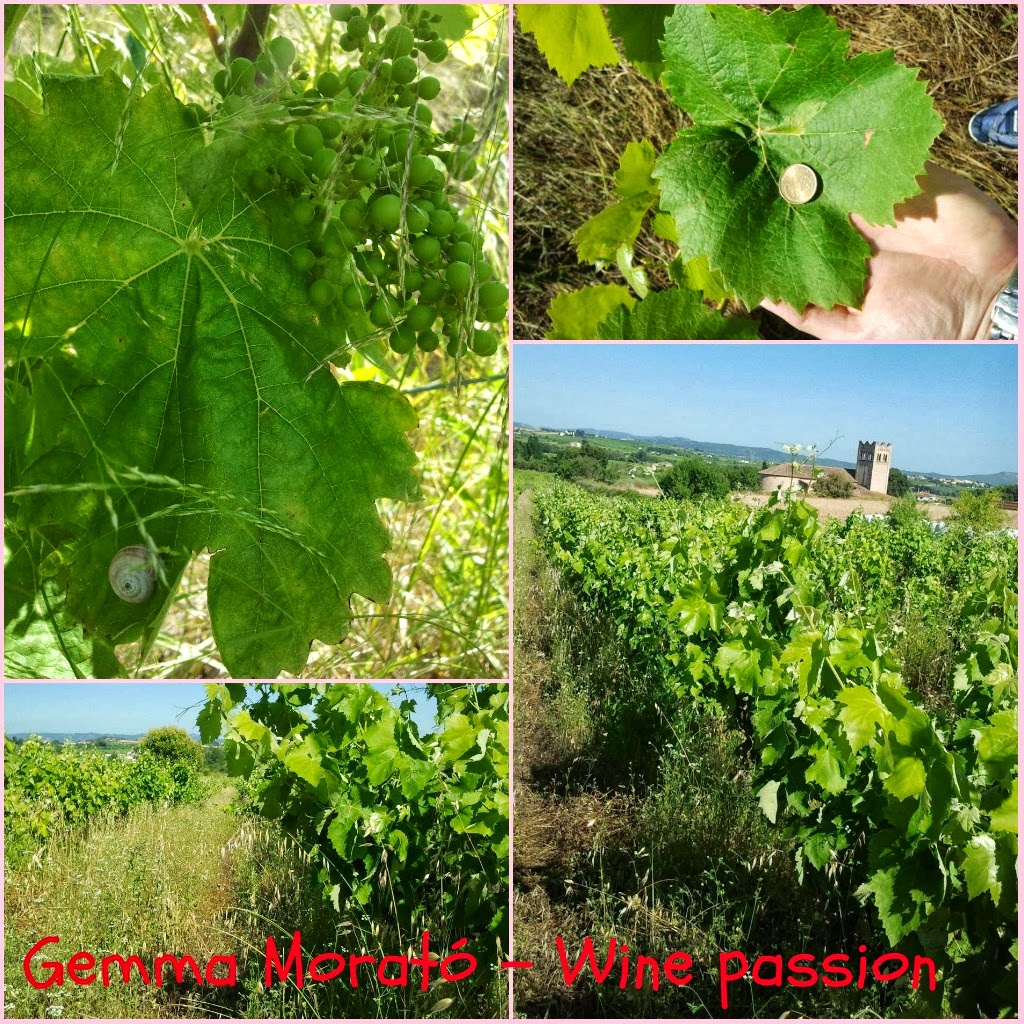 
The story behind Caligo Esssència is the result of a coincidence. It started with a plan: Pere (the oenologist and winemaker) planted Chardonnay vines and when the time was right went to harvest them to start the winemaking process. On arrival at the vineyard, he realized that the grapes weren’t as healthy as they should be; they were not in the best of conditions for winemaking so, disappointed, Pere left them in the state he found them on the vine. 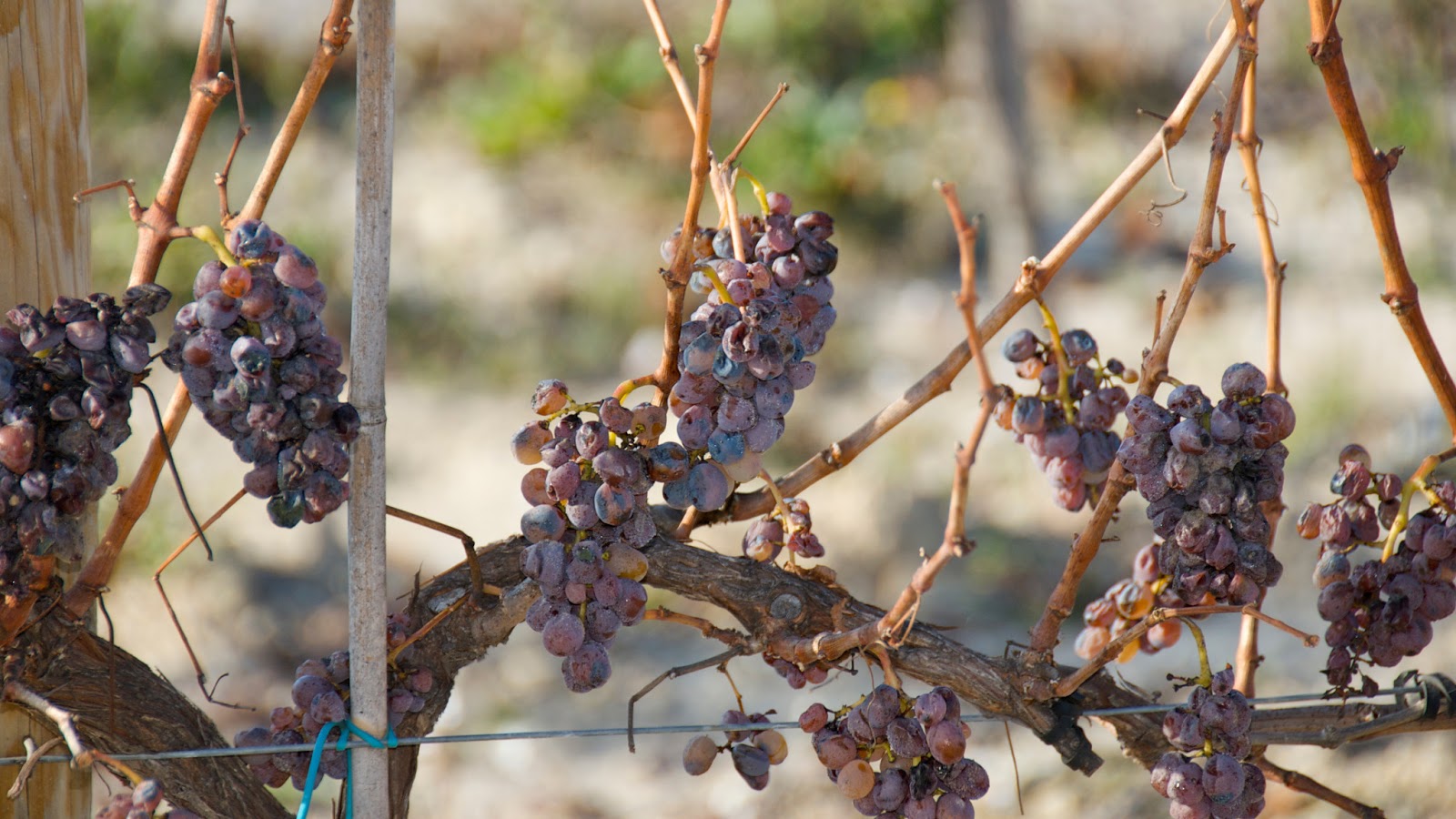 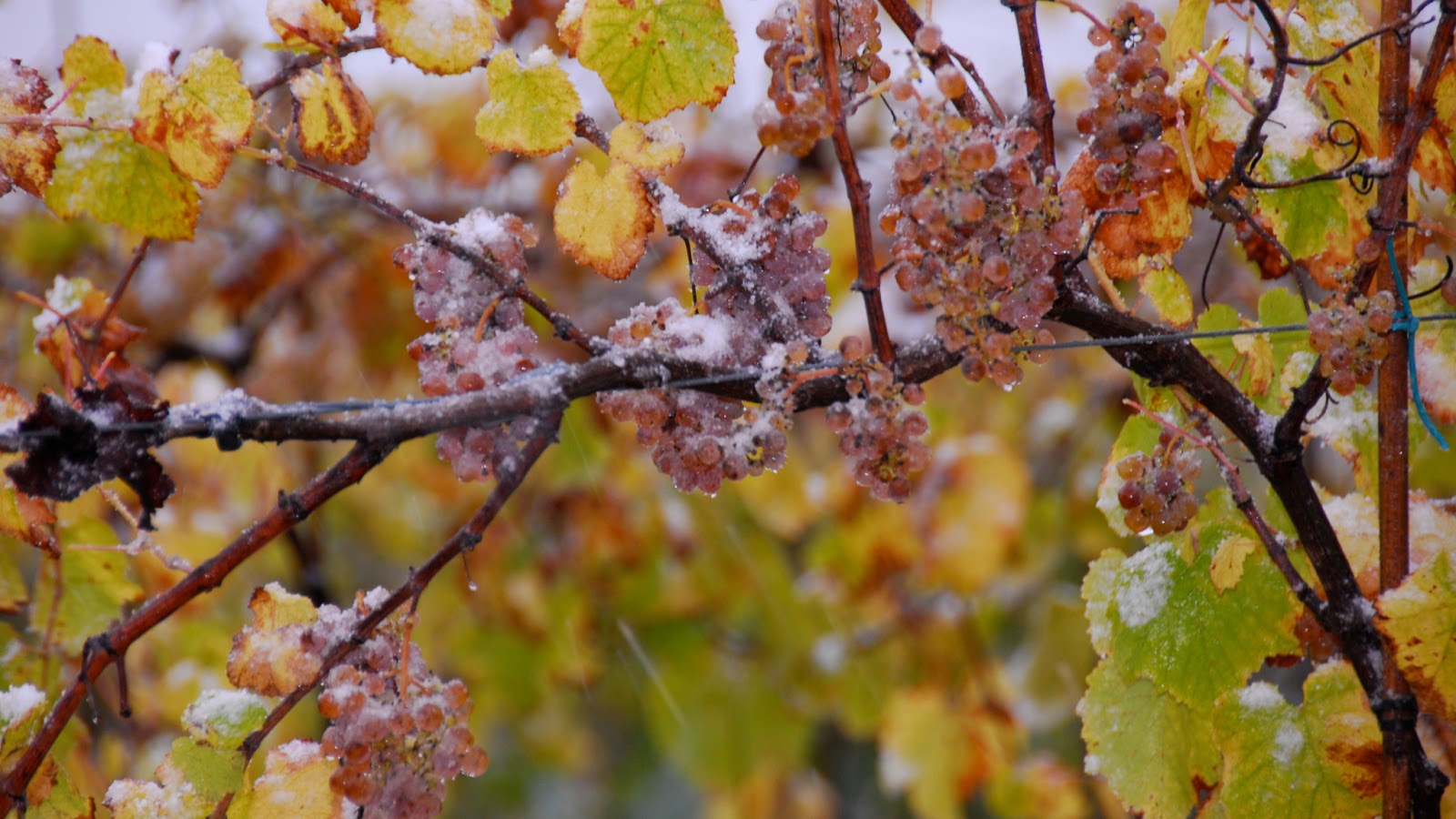 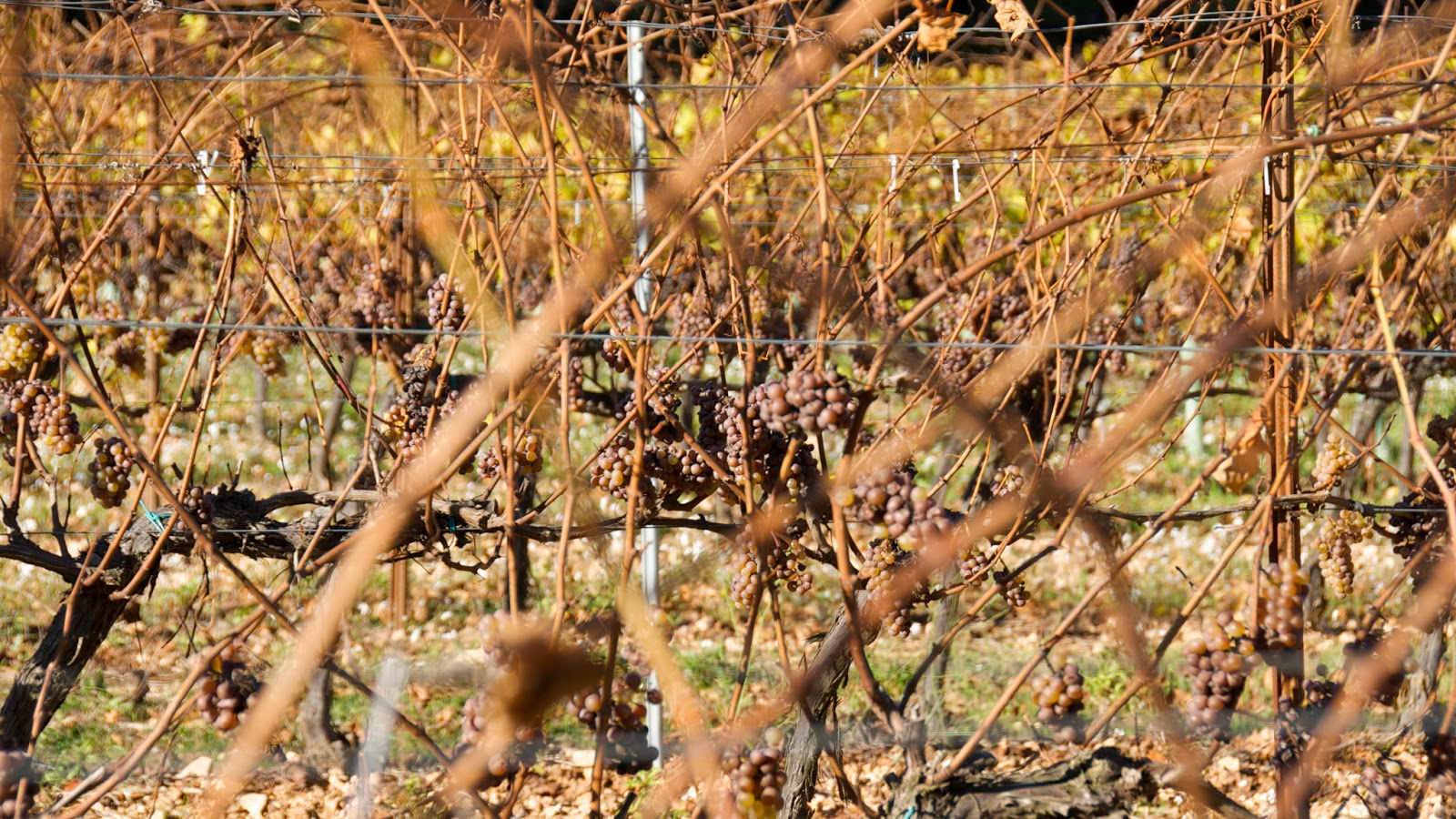 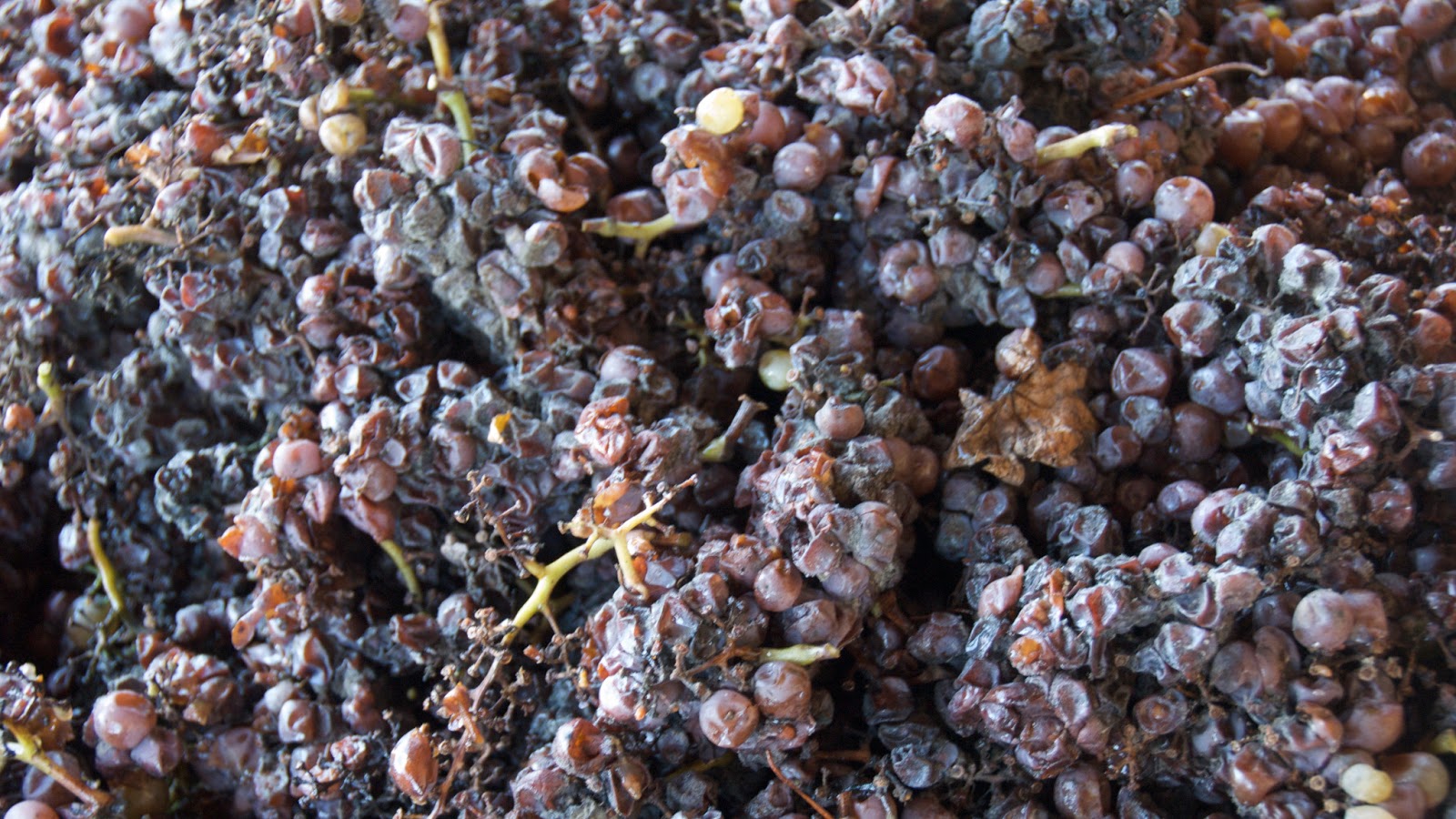 Later, after looking at a book, and seeing some pictures of grapes affected by noble rot or botrytis cinerea Pere had an idea. He began to realise that his unhealthy grapes might not be such a bad thing after all. Botrytis forms due to a fungus causing two different types of infections Gray Rot and Noble Rot. Pere’s grapes had noble rot.

Penedès is an area known mainly because quite a proportion of wine production belongs to the designation of origin Cava, and, to a lesser extent DO Catalunya. It’s difficult to understand how the same geographical area belongs to three denominations of origin, and still there are vineyards that aren’t members of any. In Penedès, the three denominations of origin –Cava, Penedès and Catalunya– live in harmony, alongside cellars that have chosen not to be certify their products in either of the regions. Conceptually it’s quite hard to understand the logic of this if you are not physically here in Penedes, and involved in wine or wine production. It would be our pleasure to explain it in person should you wish to visit us in Penedes! 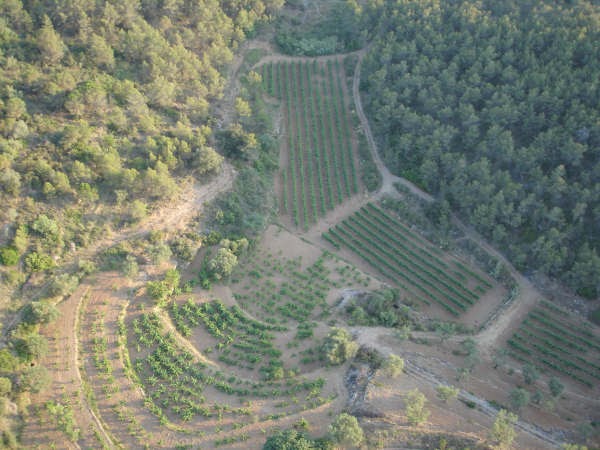 
Today is a very special day in Catalonia. It’s Sant Jordi (Saint George), similar to Saint Valentine’s day but extensive to everybody. In the schools, at work, at home, with friends… around are nice activities and, of course, in the street the atmosphere it’s just different. The streets are crammed with people looking at the stalls -decorated with the Catalan flag- and full of books and roses, performances of Sant Jordi’s legend: he kills the dragon and save the princess and from the dragon blood grow up a rose bush full of red roses. And the tradition says that women are given away with a (red) rose and men with a book… it’s a nice tradition, but I prefer not to choose, both: book and rose.

Today I’ve got my book and my rose, nice presents from my sister: a lovely red rose muffin (a vegan muffin!!!) with a book called Catedrals del vi (Wine cathedrals). It is an interesting book about the history of the cooperative cellars in Catalonia. Most of these buildings are Modernist and were built at the beginning of the XXth century by architects like Cèsar Martinell (a disciple of Antoni Gaudí), Pere Domènech and others.

I think it’s just the book that I will enjoy. It’s not a novel, but it’s full of histories, places to visit and wines to taste!!

So today, after work, I’ll continue with the tradition and I will go to have a look at the stands and choose nice books for my dearest people and finish the day with a glass of wine, or two, and nice company.